Fault code P0011 is called “”A” Camshaft Position – Timing Over-Advanced or System Performance (Bank 1)” but in different programs it may be called differently. This fault designation applies to all vehicles equipped with OBD-II.

This Diagnostic Trouble Code (DTC) is a generic powertrain code. Error P0011 is considered a general code because it applies to all makes and models of vehicles. Although the specific repair steps may vary slightly depending on the model. 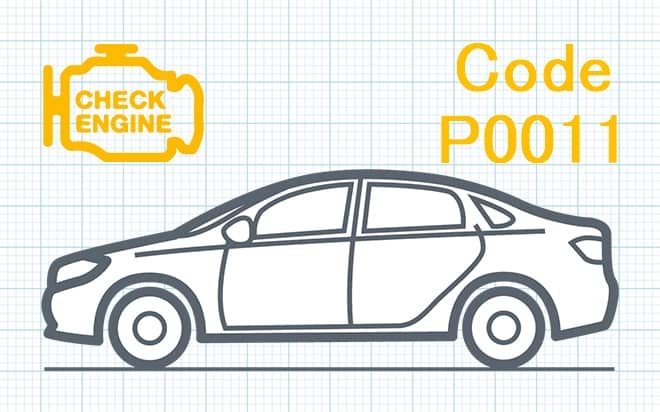 VVT is a technology used in an engine that allows more power or efficiency at different operating points.

The mechanism consists of several different components, but code P0011 DTC specifically refers to the camshaft timing gear (cams). In this case, if the camshaft timing is above the specified limit (too high). Then the engine error will appear on the panel, and its code will be recorded in memory.

The camshaft “A” is either the intake left or front camshaft if the engine is a V-twin. This code applies to bank 1 only. Bank 1 is the side of the engine where the first cylinder is located.

The main signal that an error P0011 has occurred is the Malfunction Indicator Lamp (MIL) is also known as the CheckEngine Light.

If there is a significant difference between the set shaft offset angle and the actual offset read by the sensor. The valve stops working and the ECM activates code P0011.

The error code P0011 can mean that one or more of the following problems have occurred:

Because the camshaft phasing solenoid valve uses oil flow to control phasing. Contaminated oil can cause the valve to lock in the open or closed position. Before replacing the valve, change the engine oil and filter, and reset the engine code.

This DTC is the result of a mechanical failure of the VCT unit or related components. Therefore, there is no particular need for further electrical diagnosis of error P0011. To test the VCT unit components, a special vehicle repair manual must be consulted.

You can also go to the service, dealer technology has advanced tools and the ability to perform detailed troubleshooting steps. Including the ability to test components with a scan tool.

Perform an electrical test of the phase sensor. Make sure that there is no oxidation on the contacts and that there is power flowing through the wires.

Visual inspection of the phase sensor. The sensor should be removed and checked for chips, cracks and dirt. Which in most cases are caused by irregular oil changes in the engine.

Measure to have 12 volts applied to the valve with the sensor removed. This will ensure that the stem will move.

Diagnostics can also be done with the engine running. You need to remove the chip and apply power to the two pins from the battery. If the valve is working, the engine speed will drop and the engine will stall.

Fault code P0011 can occur on different vehicles but there are statistics on which brands this occurs most often. Here is a list of some of them: