Fault code P0056 is called “HO2S Heater Oxygen Sensor Control Circuit (Bank 2, Sensor 2)” but in different programs it may be called differently. This fault designation applies to all vehicles equipped with OBD-II.

This diagnostic trouble code (DTC) is a generic code. Error P0056 is considered a generic code because it applies to all makes and models of vehicles. Although the specific repair steps may vary slightly depending on the model. 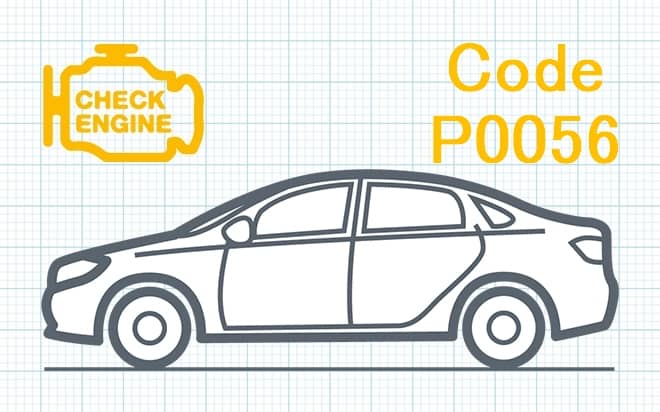 Heated oxygen sensors are used in vehicles to determine the oxygen content in the exhaust system before and after the catalytic converters. They use feedback to adjust the fuel system. To maintain an optimal air/fuel mixture ratio of 14.7:1.

Two are usually used for feedback to the transmission control module (PCM). And the other wires are for the heater and to power the heated circuit. Three-wire sensors are usually grounded through the exhaust system. And four-wire sensors have a separate ground wire.

Code P0056 refers to the sensor after the Bank 2 catalytic converter, which is not on the engine side with cylinder 1. The error means that the problem with the HO₂S sensor heater element has not been corrected. This code is triggered when the sensor takes too long to heat up.

The main signal that an error P0056 has occurred is the Malfunction Indicator Lamp (MIL) is also known as the CheckEngine Light.

If fault code P0056 appears, the vehicle can continue to drive, but the problem must be corrected as soon as possible. To prevent potential problems such as sensor circuit failure and increased fuel consumption. If the problem is ignored for a long time, unstable engine operation may occur, and other components may be damaged.

The error code P0056 can mean that one or more of the following problems have occurred:

Some suggested steps for troubleshooting and fix the error code P0056:

Failure P0056 can only be caused by the oxygen sensor heater circuit or by the sensor itself. Diagnostics usually begins with checking the sensor wiring. Usually the heated oxygen sensor comes with four wires.

Two wires go directly to the heater circuit, and the other two are for powering and grounding the sensor. You may need a wiring diagram of your car. To be sure you’re checking the right set of wires.

Check the heater circuit with a digital multimeter or voltmeter. Refer to the vehicle’s wiring diagram to determine the exact pins of the connector where the ground is installed.

The reading should be close to the battery voltage. If it is not, there is most likely a problem with the sensor power.

It is also necessary to check the ground. To do this, connect the positive battery terminal to the red wire on the multimeter. And the black wire to the ground to check the circuit ground. The result should be 12 V, if not, it indicates a grounding problem on the sensor.

If power and ground are okay, the next option is to check the sensor heating element. To determine if it has an open circuit or high resistance.

Set a voltmeter on the ohm scale, check the resistance of the heater circuit, using the wiring diagram as a reference.

Make sure that you have disconnected the oxygen sensor O₂. The heater circuit inside the sensor should have a low resistance. Exceeding the limit value indicates a break in the heater part. Therefore, the oxygen sensor will have to be replaced.

Fault code P0056 can occur on different vehicles but there are statistics on which brands this occurs most often. Here is a list of some of them: