Fault code P006E is called “Turbocharger/Supercharger Boost Control “A” Supply Voltage Circuit Low” but in different programs it may be called differently. This fault designation applies to all vehicles equipped with OBD-II.

Stored fault code P006E indicates that the control module (PCM) has detected a problem in the turbocharger or supercharger system. In this case, the “A” supply circuit voltage of the engine supercharger is low. 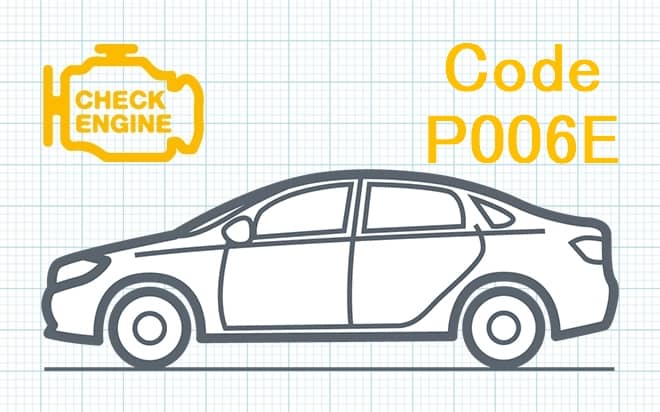 In systems with forced induction, the inlet pressure must be varied and adjusted according to the power required at the time. This is done by using a boost regulating valve. This is monitored and controlled by the engine control module to provide the engine with the ideal fuel/air mixture.

This is accomplished by mechanically adjusting the turbocharger/charger blades. The blades are responsible for adjusting the amount of boost that delivers air into the combustion chamber. If the PCM loses control of the supercharger, it causes the engine to run erratically.

Fault code P006E is activated when the engine control module detects that a low supply circuit voltage is detected that is outside the desired range. Then, the controller turns on the check engine light (CEL). And the error is recorded in memory as a malfunction in the supercharger control system.

It may take several failure cycles for the MIL control lamp to turn on in the instrument panel.

The main signal that an error P006E has occurred is the Malfunction Indicator Lamp (MIL) is also known as the CheckEngine Light.

The severity level of fault code P006E ranges from medium to high, depending on the symptoms. This error should not be ignored, as you risk damaging internal engine components. Therefore, it is in your best interest to troubleshoot the forced induction system as soon as possible.

The error code P006E can mean that one or more of the following problems have occurred:

Some suggested steps for troubleshooting and fix the error code P006E:

The diagnostic process for the P006E error is best started with the most common turbo problems. These will require tools such as a vacuum gauge and a dial gauge.

If after all the checks no problems are found, but code P006E has not disappeared, it is necessary to check the electrical components. The sensors and associated circuits should be tested.

Check that the valves are securely grounded. Connect the test lamp to the plus side of the battery, and touch the other end to the valve ground circuit. If the pilot light does not come on, it indicates a faulty circuit.

Fault code P006E can occur on different vehicles but there are statistics on which brands this occurs most often. Here is a list of some of them: