Fault code P00A2 is called “Charge Air Cooler Temperature (CACT) Sensor Circuit Low (Bank 2)” but in different programs it may be called differently. This fault designation applies to all vehicles equipped with OBD-II.

The diagnosis code P00A2 is a general diagnosis code that applies to vehicles with a charge air cooler temperature sensor. Although generic, the exact steps of repair may differ depending on the make as well as the model. 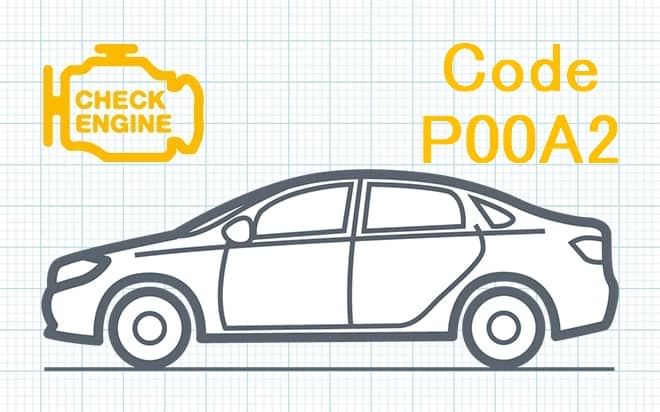 A turbocharger is an air pump used to force air into the engine. It consists of two connected parts, a turbine and a compressor.

Many engines are equipped with a discharge air cooler, also known as an intercooler. Charge air coolers can be air-liquid or air-air, but all are designed to cool the air entering the intake.

The charge air cooler temperature sensor (CACT) is used to measure the temperature and therefore the density of the air coming out of the cooler. This information is sent to the powertrain control module (PCM).

The control module compares the incoming information to the intake air temperature to determine the capacity of the charge air cooler.

Code P00A2 is set when the PCM detects a low signal in the discharge air cooler temperature sensor circuit (Bank 2). In multi-unit engines, Bank 2 refers to a cylinder group that does not contain cylinder 1.

The main signal that an error P00A2 has occurred is the Malfunction Indicator Lamp (MIL) is also known as the CheckEngine Light.

Fault P00A2 is considered serious, as it affects the safety and drivability of the vehicle. Ignoring the fault may result in costly repairs, it is recommended to eliminate the problem as soon as possible.

The error code P00A2 can mean that one or more of the following problems have occurred:

Some suggested steps for troubleshooting and fix the error code P00A2:

Also visually inspect the discharge air cooler and ducts. If damage is found, repair, then clear the code and see if it returns.

Using a diagnostic tool, monitor the data parameters from the discharge air cooler temperature sensor. Disconnect the CACT sensor, the value on the diagnostic tool should drop to a very low value.

Then connect a jumper to the terminals, the diagnostic tool should show a very high temperature. If it does, then the problem is with the sensor and not with the circuit or PCM module.

Disconnect the discharge air cooler temperature sensor connector. Then measure the resistance between the two sensor leads with a digital multimeter set to ohms.

Start the engine and look at the values, they should decrease smoothly as the engine warms up. Check the engine temperature gauge on the dashboard to make sure the engine has reached operating temperature.

If the engine temperature increases but the CACT resistance does not decrease, the sensor is defective and must be replaced. After troubleshooting, the problem with error P00A2 should be resolved.

Fault code P00A2 can occur on different vehicles but there are statistics on which brands this occurs most often. Here is a list of some of them: