Fault code P00B8 is called “MAP – Mass or Volume Air Flow (MAF/VAF) Correlation (Bank 2)” but in different programs it may be called differently. This fault designation applies to all vehicles equipped with OBD-II.

Diagnostic code P00B8 is a generic code defined as a correlation between the manifold absolute pressure sensor and the mass or volume flow sensor (Bank 2). It is set when the PCM detects a change between the signal voltages of the MAP sensor and the MAF/VAF sensor. 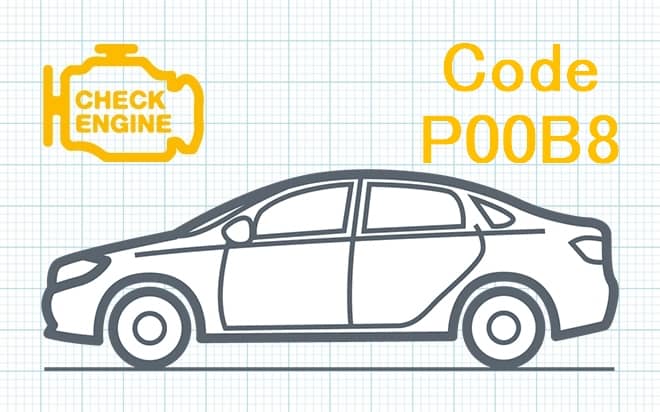 The air density in the intake manifold is reflected by the MAP sensor, which provides a voltage signal to the PCM. When the engine is running at maximum efficiency, it creates a strong vacuum, which is limited by the opening/closing of the throttle body.

The vacuum is controlled by the movement of the throttle body and the idle air control valve (IAC) when the engine is idling. This vacuum effectively draws in the air needed to complete each combustion cycle.

The exact ratio of fuel to air is one of the most important factors in achieving maximum fuel efficiency. When the throttle is opened, the air entering the intake manifold is measured by the MAF or VAF sensors.

The amount of fuel delivery and ignition is calculated by the PCM module based on the data received from the MAF or VAF sensors. The air that passes through these devices is called metered air. Air that inadvertently enters the engine can contribute to excessive lean and is called underdosed air.

The key difference between the MAF and VAF sensors is that the VAF has a damper that is opened by air drawn into the intake port. At idle, the spring-loaded damper is locked in the closed position.

When the throttle is opened, the VAF sensor damper is forcibly opened. This actuates the potentiometer, which transmits a voltage signal to the PCM. The PCM recognizes these potentiometer voltage changes as the degree of metered air intake into the intake duct.

Code P00B8 will be stored if the PCM detects voltage signals between the MAP and MAF/VAF sensors (Bank 2) that differ by more than the programmed value. The Malfunction Indicator Light (MIL) will then illuminate, which may require several ignition failure cycles to illuminate.

The main signal that an error P00B8 has occurred is the Malfunction Indicator Lamp (MIL) is also known as the CheckEngine Light.

Error P00B8 is a serious error, because fuel supply and ignition advance angle setting are critical to engine performance and efficiency.

The error code P00B8 can mean that one or more of the following problems have occurred:

Some suggested steps for troubleshooting and fix the error code P00B8:

Inspect visible damage to sensors, wiring, and connectors. Then start the diagnostic procedure with the scan tool. To determine if error P00B8 is the only error, if not, it may be worth investigating the other fault codes first.

If no problems are found with damaged or corroded connectors, perform a thorough inspection of all associated wiring. Repair or replace damaged wiring as necessary.

Also check the vacuum lines for damage and leaks. Look at the condition of the air filter, it may be clogged, limiting air flow.

If the code remains, check the reference voltage on the MAP, MAF/VAF, and IAT and BARO sensor connectors. Then check the ground and continuity, especially in the signal wire between the PCM and the sensor connectors, if the resistance is infinite, repair the breakage.

If circuit continuity is normal, check the sensors in operation by connecting the scanner to the car. If the signal voltage does not change according to the manufacturer’s specifications, replace the faulty sensor.

Often, sensor readings may be stuck at 4.5 volts, regardless of engine operating conditions. This indicates a short between the signal wire and the 5-volt reference wire. If necessary, repair the wiring to remove the short.

If there is no voltage in the signal wire when the sensor connector is disconnected, there is an internal short and the sensor must be replaced.

Also in some cases when error P00B8 occurs, the PCM may be faulty or in the process of breaking down. This is extremely rare, so before replacing it, it’s best to check everything thoroughly again.

Fault code P00B8 can occur on different vehicles but there are statistics on which brands this occurs most often. Here is a list of some of them: