Fault code P0165 is called “O2 Sensor Circuit Slow Response (Bank 2, Sensor 3)” but in different programs it may be called differently. This fault designation applies to all vehicles equipped with OBD-II.

Stored code P0165 means that the powertrain control module (PCM) has detected a slow response time from the 3rd oxygen sensor O₂ or circuit. Bank 2 indicates an engine group that does not contain cylinder number one. 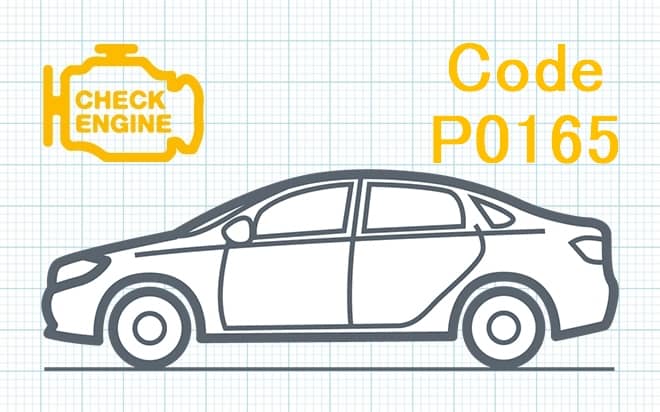 The O₂ sensors are designed with a zirconium dioxide sensing element that is protected by a ventilated steel housing. The sensing element is connected with platinum electrodes. The PCM is connected to the sensor wiring harness O₂ using the Controller Area Network (CAN). The PCM transmits data about the percentage of oxygen particles in the engine exhaust compared to the oxygen content in the ambient air.

Deviations between the amount of oxygen molecules in the ambient air and the concentration of oxygen ions in the exhaust gases cause voltage changes. These changes cause the ions inside the sensor to rapidly transfer between platinum layers.

The PCM detects voltage changes as changes in the concentration of oxygen in the exhaust gases. These changes indicate that the engine is running lean (too little fuel) or rich (too much fuel).

If the O₂ No. 3 sensor circuit does not work properly within the set time period and under certain programmed circumstances. Then error P0165 will be stored in the memory, and the malfunction lamp may illuminate.

The main signal that an error P0165 has occurred is the Malfunction Indicator Lamp (MIL) is also known as the CheckEngine Light.

Error P0165 is not considered serious, the car will be able to start and continue driving. But ignoring it for a long time may lead to catalytic converter failure and other consequences.

The error code P0165 can mean that one or more of the following problems have occurred:

Some suggested steps for troubleshooting and fix the error code P0165:

It is necessary to read out all saved data and error codes with an OBD-II scanner. Clear the error codes from the computer memory and test-drive the vehicle. To find out if code P0165 appears again.

With the sensor removed from the vehicle, inspect it for discoloration or buildup of deposits that can render the sensor inoperable. For example, fouling caused by excessive oil combustion may cause an internal short circuit. If the sensor is defective, replace it.

After repairs are completed, make sure that all wiring associated with the oxygen sensor is properly routed and secured away from hot exhaust system components. If error P0165 does not return after completing several driving cycles. Then the repair can be considered successful. But if the code does return, it is likely that an intermittent fault is present.

Fault code P0165 can occur on different vehicles but there are statistics on which brands this occurs most often. Here is a list of some of them: