Fault code P0199 is called “Engine Oil Temperature (EOT) Sensor Circuit Intermittent” but in different programs it may be called differently. This fault designation applies to all vehicles equipped with OBD-II. 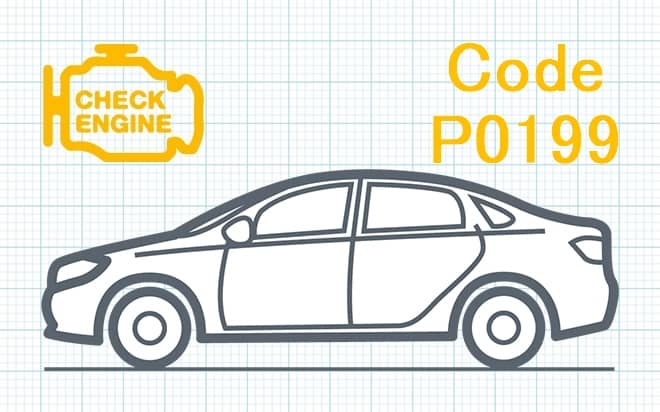 The engine oil temperature sensor (EOT) generates a signal that is used by the powertrain control module (PCM) to calculate fuel quality. It also calculates the injection timing and glow plug operation.

The EOT signal is also compared with signals from other sensors, such as the intake air temperature (IAT) and engine coolant temperature (ECT).

The EOT sensors receive a reference voltage from the PCM, which is typically 5 volts. The internal resistance changes with engine oil temperature and the voltage signal is sent back to the PCM.

EOT sensors are a type of negative temperature coefficient (NTC) thermistor. This means that the internal resistance is inversely proportional to the oil temperature. The EOT sensor signal voltage decreases when the engine oil temperature rises, and vice versa.

Code P0199 is set when the PCM detects an intermittent signal in the engine oil temperature sensor circuit. This usually indicates a short circuit or other circuit problem.

The main signal that an error P0199 has occurred is the Malfunction Indicator Lamp (MIL) is also known as the CheckEngine Light.

The error code P0199 can mean that one or more of the following problems have occurred:

Some suggested steps for troubleshooting and fix the error code P0199:

Check that the oil level is at the proper level, that it is not diluted with fuel or coolant, and that it is not of a thick, tarry consistency. If necessary, refill or replace the oil before proceeding with further diagnosis.

Perform a thorough visual inspection of the wiring to look for damaged, burned, disconnected, shorted, or corroded wires and connectors. If necessary, repair, clear the P0199 code and re-scan the system to see if the code returns.

Check the wiring with a multimeter

After no visible damage is found, check the resistance, ground and reference voltage. Compare all readings with those in the manual. If necessary, replace the wiring to ensure that all readings meet the manufacturer’s specifications.

Remember to disconnect the wiring from the PCM while checking resistance and continuity to prevent damage to the controller. The engine oil temperature sensor itself should also be checked, as it is part of the control circuit.

Disconnect the engine oil temperature sensor connector, then measure the resistance between the two sensor terminals using a digital multimeter set to ohms. Start the engine and watch the meter readings, the values should decrease smoothly as the engine warms up.

If the engine temperature increases and the EOT resistance does not decrease, then the sensor is defective and must be replaced. In this case, replacement of the engine oil temperature sensor will solve the problem of error P0199.

Fault code P0199 can occur on different vehicles but there are statistics on which brands this occurs most often. Here is a list of some of them: