Fault code P0236 is called “Turbocharger Boost Sensor “A” Circuit Range/Performance” but in different programs it may be called differently. This fault designation applies to all vehicles equipped with OBD-II.

OBD-II fault code P0236 is a generic fault, most often defined as an invalid “A” boost pressure sensor circuit signal. It is set when the Powertrain Control Module (PCM) detects a general fault in the boost induction control circuit. 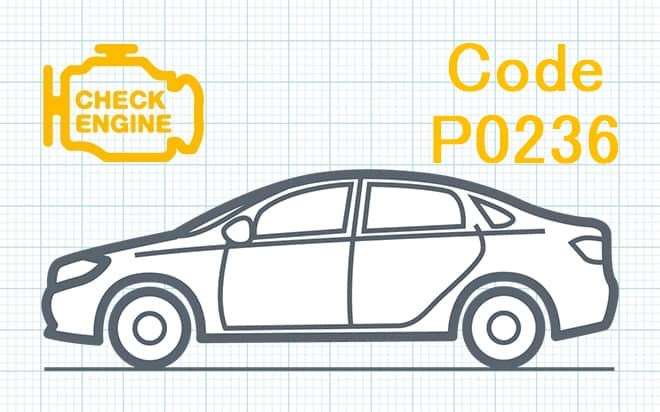 Regardless of the specifics of the device used (turbocharger / supercharger). The goal is to increase the power output of the engine without using significantly more fuel. Although forced induction is widely used, this technology is particularly useful for small engines. Because it gives a huge increase in power at a relatively low cost. And also without significant losses in terms of weight and fuel consumption.

However, supercharger pressure needs to be controlled, both to maximize benefit and to protect the engine from the effects of excessive pressure. To do this, turbochargers use built-in mechanical devices to relieve excessive pressure. These devices are controlled electronically by the PCM, so the boost pressure, never exceeds the maximum allowable limit.

To effectively control the boost, the PCM uses primary input from the absolute manifold pressure (MAP) sensor. This value is then compared with input data from the engine speed sensor. It also uses the intake air temperature (IAT) and throttle position sensor (TPS).

If the charge control system is fully functional, the PCM will use the combined input from all of the sensors involved. However, if the boost control circuit fails, the PCM can no longer effectively control the boost pressure.

Therefore, code P0236 is set and a warning light will illuminate as a result. Note that depending on the nature of the problem, the PCM may also set additional codes. Some of which may cause it to go into failsafe or emergency mode. This is done as a precautionary measure as well as to protect the engine.

The main signal that an error P0236 has occurred is the Malfunction Indicator Lamp (MIL) is also known as the CheckEngine Light.

The error code P0236 can mean that one or more of the following problems have occurred:

Some suggested steps for troubleshooting and fix the error code P0236:

The diagnostic process for the P0236 error is best started with the most common turbo problems. These will require tools such as a vacuum gauge and a dial gauge.

If there is no problem after all the checks, but code P0236 is still present, check the electrical components. You need to test the boost sensor and wiring harness with a voltmeter. Make sure there is 5 volts coming to the sensor from the PCM to the sensor.

No voltage means an open or short in the wiring harness. The PCM may also be faulty. Locate the reference signal from the boost sensor to the engine control unit and see if the voltage changes as the RPM increases. No voltage spike indicates a faulty sensor.

Fault code P0236 can occur on different vehicles but there are statistics on which brands this occurs most often. Here is a list of some of them: