Fault code P0299 is called “Turbocharger/Supercharger “A” Underboost Condition” but in different programs it may be called differently. This fault designation applies to all vehicles equipped with OBD-II.

This Diagnostic Trouble Code (DTC) is a generic powertrain code. Error P0299 is considered a general code because it applies to all makes and models of vehicles. Although the specific repair steps may vary slightly from model to model. 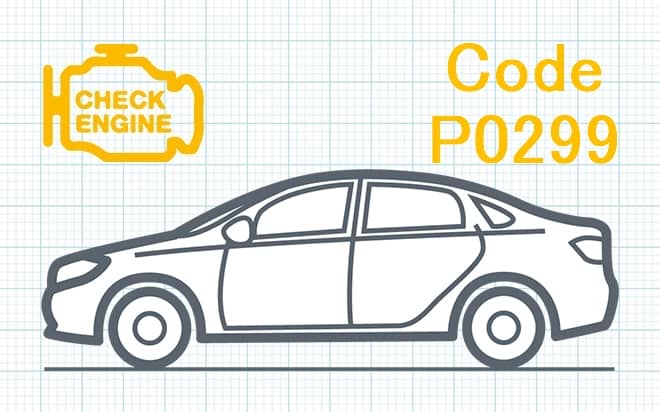 This DTC error occurs when the powertrain/engine control module (PCM/ECM) has detected the following. That bank “A”, the turbine or supercharger is not providing the normal boost (pressure) level.

The problem may be caused by various reasons, which will be explained in more detail. On a normally running engine with a turbine or supercharger. The air entering the engine is pressurized, which adds power to the engine.

When this code appears, you will likely notice a decrease in power. Turbochargers are driven by the exhaust gases coming out of the engine. To use the turbine to force air into the intake.

The compressor is mounted on the intake side of the engine and is usually driven by a belt drive. This is done to draw more air into the intake, without a connection to the exhaust.

In Ford vehicles, the ECU checks the Throttle Intake Minimum Pressure (TIP) PID signal while the engine is running. Which indicates the status of the air supply. This code illuminates when the ECU detects that the actual intake pressure through the throttle is less than desired. Normally the data should be below 0.27 bar or more for 5 seconds”.

In the case of VAG vehicles, the code definition is slightly different and means “Supercharging pressure regulation”. That is, the control range is not reached. But, if you understand it, it is just another spelling of this problem.

The main signal that an error P0299 has occurred is the Malfunction Indicator Lamp (MIL) is also known as the CheckEngine Light.

No other symptoms are likely to occur.

The severity of this code can range from moderate to severe. If you delay fixing this problem, you may be faced with more significant and costly repairs.

The error code P0299 can mean that one or more of the following problems have occurred:

Some suggested steps for troubleshooting and fix the error code P0299:

If turbocharger is malfunctioning due to mechanical / internal problems. Or the exhaust system is restricted (usually a clogged catalytic converter). These faults could be the end result of the search.

First, correct the other DTC error codes, if present, before diagnosing the problem associated with the P0299 fault. Next, try to find the Technical Service Bulletins (TSB). Which pertain to your vehicle (year, engine power, model).

TSBs are bulletins issued by the car manufacturer to provide information on known problems. Usually describing specific trouble codes like this one. If there is a known TSB, you should start with the diagnostics described in it, it can save time and money.

If the intake system is OK, you should concentrate your efforts on diagnosing the regulator. As well as the bypass valve, sensors, etc.

There are some known problems on certain makes and engines. For example, a common solution to the P0299 error for VAG is to replace or repair the bypass valve or solenoid valve.

On a GM diesel engine, this code could mean that the resonator of the turbocharger housing has failed. If you have a Ford, you will need to check the damper control valve solenoid for proper operation.

The information in this article is generalized and each model may have its own fix for this code.

Fault code P0299 can occur on different vehicles but there are statistics on which brands this occurs most often. Here is a list of some of them: