Fault code P0394 is called “Camshaft Position Sensor “B” Circuit Intermittent/Erratic (Bank 2)” but in different programs it may be called differently. This fault designation applies to all vehicles equipped with OBD-II.

The camshaft position sensor is an electronic device used in the engine to record the speed of the camshaft. This information is used by the engine control module (ECM) to control ignition and fuel injection. 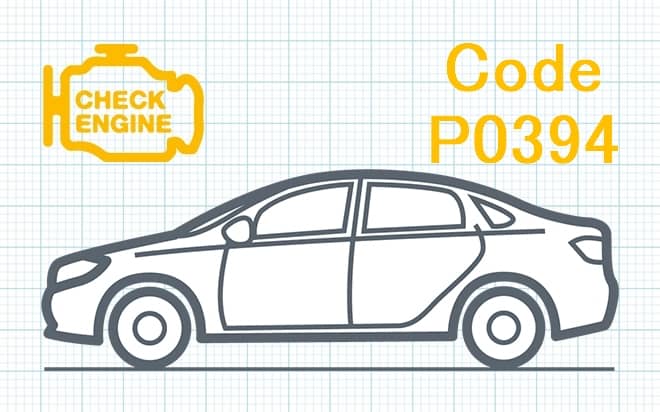 The camshaft position sensor monitors the camshaft for specific cylinder identification and determines the piston position. The sensor system consists of a rotating part, usually a disc, and a static part, the actual sensor.

Automotive fault code P0394 is one of several common fault codes related to the camshaft position sensor (CPS). It means that the sensor signal is intermittent, exceeding the allowable parameters laid down by the vehicle manufacturer.

The main signal that an error P0394 has occurred is the Malfunction Indicator Lamp (MIL) is also known as the CheckEngine Light.

The vehicle is likely to run with the fault code P0394. But it may be difficult to start, and there may be a drop in power and unstable engine operation. To avoid damage to other engine components when this code is detected, it is advisable to correct the fault as soon as possible.

The error code P0394 can mean that one or more of the following problems have occurred:

On some models, low battery voltage or weak starter may cause camshaft position sensor code P0394.

Some suggested steps for troubleshooting and fix the error code P0394:

Often replacing the sensor will fix the P0394 error code, but not necessarily. Therefore, it is important to do a check of all items.

Error P0394 refers to an electrical circuit problem, but the camshaft position sensor should not be overlooked. The sensor itself can fail, but its replacement does not always solve the problem. Therefore, it is necessary to check the electrical circuit with a digital voltmeter as well.

Make sure that the connector on the sensor is secure. Also, inspect the wiring harness for damage. For example, damage from recent engine repairs, impact or rodent damage.

It is best to use a digital oscilloscope to check the signal. But you can also get a rough estimate by putting the voltmeter in alternating voltage mode. The test should give at least 20 mV.

Disconnect the ECM and CMP controller connectors, then place a short jumper on the CMP connector terminals. A small paper clip or wire may be used for this purpose.

On the ECM controller side, check the resistance in the circuit itself. It should be less than 0.1 ohm. If it is more, ECM will not be able to detect the signal. Therefore, you need to look for a broken wire or corrosion.

Remove the jumper and check the circuit for a break, if there is resistance, a short circuit has most likely occurred. Water in the connector can easily cause this. Check for a ground fault by taking one of the leads and connecting it to “ground” or the negative battery terminal.

If no problems are found in the CPS sensor or its wiring, P0394 is probably just an auxiliary fault code. Pay attention to a jumped timing belt. There may also be a faulty signal, crankshaft position sensor circuit, or engine ignition misfire.

Fault code P0394 can occur on different vehicles but there are statistics on which brands this occurs most often. Here is a list of some of them: