Fault code P0428 is called “Catalyst Temperature Sensor High (Bank 1, Sensor 1)” but in different programs it may be called differently. This fault designation applies to all vehicles equipped with OBD-II.

This Diagnostic Trouble Code (DTC) is a generic code. Error P0428 is considered a generic code because it applies to all makes and models of vehicles. Although the specific repair steps may vary slightly depending on the model. 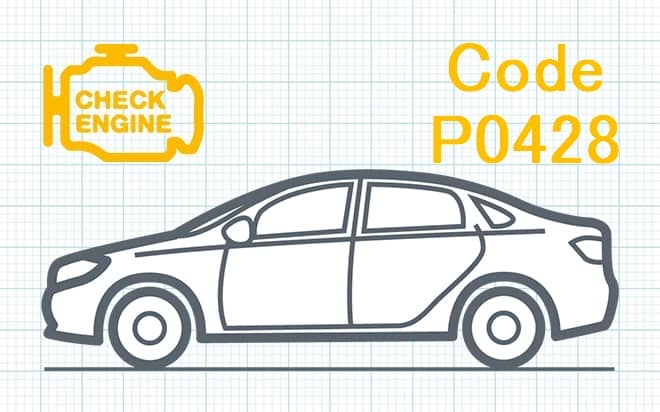 Normally, code P0428 is set and the check engine lamp (Check Engine) lights up if the readings of the two sensors reflect the same concentration of oxygen in the exhaust gases. Oxygen sensors O₂ are also called lambda probes. The error indicates that there has been a failure in the catalytic converter reading and it is not working as efficiently as it should (according to the specifications).

Generally speaking, once you figure it out, there is no catalyst temperature sensor, error P0428 refers to the heated oxygen sensor.

Nowadays, in cars with emission control systems, heated oxygen sensors are used. The purpose of the heating element built into the oxygen sensor is to bring the sensor up to operating temperature faster.

Once this is done, the emission control will begin to work. The engine control module (ECM) monitors the temperature of the heated sensors. And if there is a malfunction, this code is set.

The main signal that an error P0428 has occurred is the Malfunction Indicator Lamp (MIL) is also known as the CheckEngine Light.

This error is considered moderate if there are no symptoms. But if symptoms are present, the cause of error P0428 should be corrected as soon as possible. Ignoring it can cause serious damage to the catalytic converter.

The error code P0428 can mean that one or more of the following problems have occurred:

Some suggested steps for troubleshooting and fix the error code P0428:

If there are no additional errors, clear fault code P0428 and perform a short test drive. To allow the PCM to go into closed loop mode, then scan the system again and see if the code comes back.

Check the catalytic converter and leaks

Check for exhaust leaks, repair them if necessary. Inspect any electrical connections that are connected to the oxygen sensor. Sometimes the electrical connector may disconnect due to heat and vibration, and the engine error light will come on.

If a code is found, check the operation of the oxygen sensors to make sure they are working properly. Compare the displayed output signals with the values indicated in the manual.

Check the wiring harness that goes to the oxygen sensor. It’s important to make sure there are no burned out, torn or severely loose spots. Which could hit any moving component while the car is in motion.

Check the operation of the O₂ sensor by thoroughly warming up the engine. Remember that the sensor will work only after it has reached its operating temperature.

Connect the sensor output to a multimeter and start the engine at about 2000-2500 rpm. The output should show a voltage fluctuating between 0.1 and 0.9 V. If the sensor output does not change or the response time is too long. This means that you have a bad oxygen sensor, you should replace it.

Oxygen sensor O₂ replacement will most likely correct the error. But sometimes, you need to replace the catalytic converter to fix the problem. If code P0428 is combined with other codes, try fixing the other codes first.

Fault code P0428 can occur on different vehicles but there are statistics on which brands this occurs most often. Here is a list of some of them: