Fault code P042E is called “Exhaust Gas Recirculation (EGR) “A” Control Stuck Open” but in different programs it may be called differently. This fault designation applies to all vehicles equipped with OBD-II. 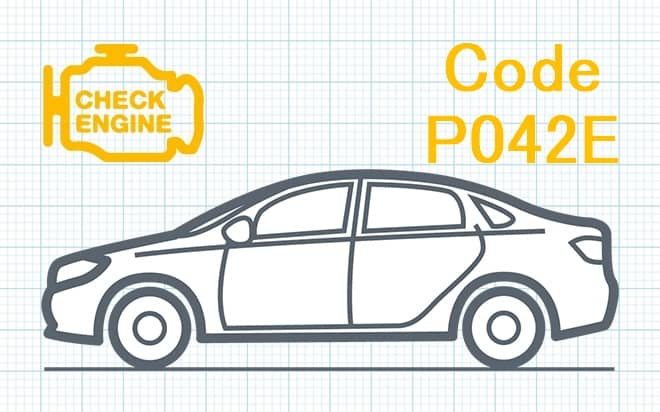 If code P042E is still present in the vehicle, then the Powertrain Control Module (PCM) has detected a problem with the Exhaust Gas Recirculation (EGR) valve control system. In this case, the valve was stuck in the open position. The designation “A” refers to the downshift position of the EGR valve control system.

EGR is controlled by the vehicle’s computer, which opens or closes the EGR system depending on load, speed, and temperature. To keep the cylinder head at the proper temperature.

There are two wires that control and communicate with the computer. There are a total of 5 wires to the solenoid. Another 2 are battery voltage and ground. As well as one reference terminal for 5 volts, usually located in the center.

If the desired position of the recirculation valve differs from the actual position, trouble code P042E will be stored. The malfunction indicator lamp (MIL) may also illuminate. Most vehicles will require several ignition cycles with the malfunction before the MIL indicator light will go off.

This is done to sufficiently dilute the incoming fuel mixture. This is to reduce the cylinder head temperature below the temperature at which NOx is generated.

Proper operation of the exhaust gas recirculation system is not only necessary to prevent NOx emissions. It also provides the engine with more power without detonation and a leaner fuel mixture for better fuel economy.

The main signal that an error P042E has occurred is the Malfunction Indicator Lamp (MIL) is also known as the CheckEngine Light.

The severity of the code P042E is high, but if there are no other symptoms besides the fault indication, the problem is considered to be moderate. But this should not become a factor for not solving the problem.

The error code P042E can mean that one or more of the following problems have occurred:

Some suggested steps for troubleshooting and fix the error code P042E:

The first step in the P042E troubleshooting process is to review the Technical Service Bulletins (TSB). For known problems with a particular vehicle.

Allow your vehicle’s engine to cool down. In most cases, exhaust gas recirculation (EGR) systems are very hot. Since they are usually installed directly on the exhaust system. Therefore, if you don’t let the engine cool down, you could get burned.

Be sure to carefully check the integrity of the wiring harnesses involved. They often run along and around the exhaust pipe. Therefore, it would be a good idea to tie off any loose wires. If you find a burned wire, solder the connections and make sure they are properly insulated.

Inspect the vent solenoid for cracks and water intrusion. Also, make sure that the connectors are properly electrically connected and that the latches are not damaged or broken.

If available with access, you can remove the exhaust recirculation valve to check its condition. These valves are susceptible to significant soot buildup. Use carburetor cleaner and a toothbrush to remove soot from any soiled areas.

When there is no obstruction in the EGR valve plug hole, follow the manufacturer’s recommendations for testing the EGR actuator solenoids. Reducing EGR valves can use more than one solenoid. To affect the full range of operation of the EGR system.

If the exhaust recirculation system uses a position sensor for the recirculation valve, it is most likely built into the valve itself. Follow the manufacturer’s recommendations, as well as the vehicle’s wiring diagrams, to check individual components.

If necessary, replace defective parts and recheck the system for error P042E.

Fault code P042E can occur on different vehicles but there are statistics on which brands this occurs most often. Here is a list of some of them: