Fault code P0852 is called “Park/Neutral Position (PNP) Switch Input Circuit High” but in different programs it may be called differently. This fault designation applies to all vehicles equipped with OBD-II.

This diagnostic trouble code (DTC) is a generic transmission code. Error P0852 is considered a general code because it applies to all makes and models of vehicles. Although the specific repair steps may vary slightly depending on the model. 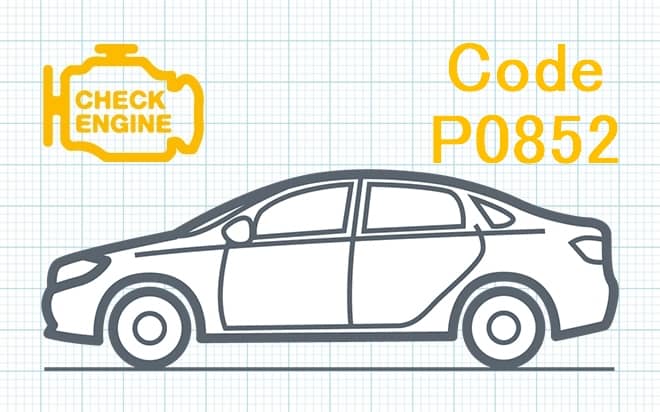 To determine gear shift patterns, the TCM control module controls the gear position switch. This switch is sometimes called the PRNDL on automatic transmissions, and the park/neutral (PNP) position.

The PNP signal is used to enable or disable engine start and cruise control. For example, when the transmission is in Park or Neutral mode, a signal is sent to the control module to allow the engine to start.

The control module constantly monitors the PNP switch, comparing its signal to expected values. If the PCM detects PNP signals outside the parameters, it sets diagnostic code P0852.

The main signal that an error P0852 has occurred is the Malfunction Indicator Lamp (MIL) is also known as the CheckEngine Light.

The severity of error P0852 may vary from moderate to severe depending on the symptoms. But in any case, it is recommended to eliminate it as soon as possible.

The error code P0852 can mean that one or more of the following problems have occurred:

Some suggested steps for troubleshooting and fix the error code P0852:

Before you begin correcting error P0852, check the technical service bulletins (TSB) for your specific vehicle. The problem may already be known with a known fix issued by the manufacturer. This can save you time and money during diagnosis.

The next step is to locate the park/neutral position switch (PNP). This is a simple on/off switch with one input and output.

The input should be 12V, the output is 0V and 12V, depending on whether the transmission is in park position or not. To diagnose the PNP switch a digital voltmeter or test lamp is usually sufficient.

Disconnect the switch and check for continuity in the various shift positions. In the park position, there should be 12 volts between the two terminals, in reverse or any other gear, there should be an open circuit.

If other values are present on the switch, it is likely faulty and must be replaced.

Fault code P0852 can occur on different vehicles but there are statistics on which brands this occurs most often. Here is a list of some of them: