Fault code P0929 is called “Gear Shift Lock Solenoid/Actuator “A” Control Circuit Range/Performance” but in different programs it may be called differently. This fault designation applies to all vehicles equipped with OBD-II.

This diagnostic trouble code (DTC) is a generic transmission code. Error P0929 is considered a generic code because it applies to all makes and models of vehicles. Although the specific repair steps may vary slightly depending on the model. 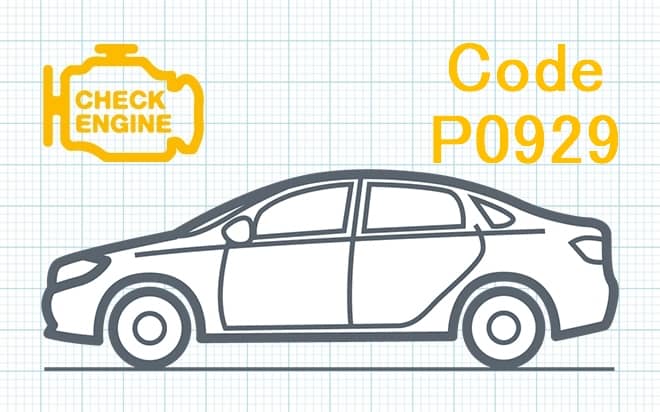 To prevent unintentional rollback, modern cars are equipped with what is called a shift lock solenoid.

When the computer determines that all conditions for safe shifting of the vehicle have been met. Your foot is on the brake pedal and the shift-lock button is pressed, the shift-lock solenoid is unlocked. The computer then allows the transmission to shift into gear.

When the control module (TCM) detects an operating range mismatch in the shift-lock solenoid/actuator “A” control circuit. Fault code P0929 will be written to memory, and an error message will appear on the control panel.

That is, the error indicates a discrepancy between the actual data and the reference data in the control circuit of this solenoid.

The main signal that an error P0929 has occurred is the Malfunction Indicator Lamp (MIL) is also known as the CheckEngine Light.

A stored fault code P0929 is considered serious because if it occurs, you will not be able to shift into gear and therefore not be able to drive. The conditions that have contributed to the stored code should be corrected as soon as possible.

The error code P0929 can mean that one or more of the following problems have occurred:

Some suggested steps for troubleshooting and fix the error code P0929:

The first thing to do when diagnosing code P0929 is to check the electrical part for damage. In today’s vehicles, electrical and electronic signals require good cabling for proper data transmission.

Any faults, such as breaks, disconnected connectors or corrosion, can interrupt signals, leading to transmission control failures. Next, check the battery, as some PCM and TCM modules are sensitive to low voltage.

If no malfunction is detected, check the shift-lock solenoid. It usually fails due to moisture ingress and oxidation of the contacts.

The transmission control module (TCM) fails very rarely, so when diagnosing error P0929, it should be checked if all other checks have been done.

Fault code P0929 can occur on different vehicles but there are statistics on which brands this occurs most often. Here is a list of some of them: