Fault code P2007 is called “Intake Manifold Runner Control (IMRC) Stuck Closed (Bank 2)” but in different programs it may be called differently. This fault designation applies to all vehicles equipped with OBD-II.

This Diagnostic Trouble Code (DTC) is a general powertrain code. Error P2007 is considered a general code because it applies to all makes and models of vehicles. Although the specific repair steps may vary slightly depending on the model. 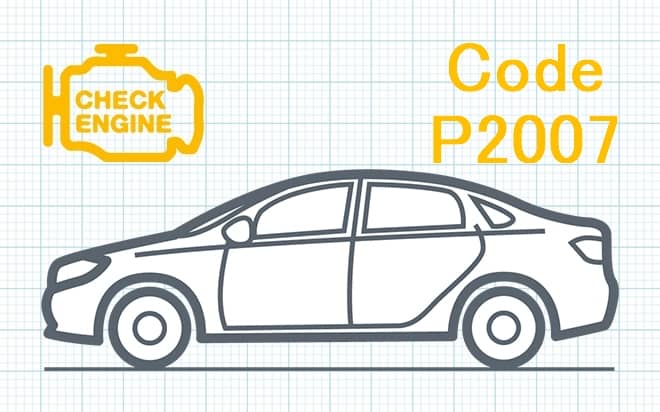 The manifold flaps are designed to increase or decrease the rate at which the intake air flows through the intake manifold. The flaps are adjusted by an actuator.

The degree of opening depends on engine speed and other operating conditions. Such as throttle position and speed. Also, environmental factors such as atmospheric pressure and ambient temperature.

A high degree of control is required for the system to work properly. Code P2007 refers to both mechanical failure and electrical open circuits in the actuator controls. But vacuum leaks, can also cause this code in some cases. Because the damper position sensor may be giving a signal that does not correspond to the desired position.

When an intake manifold actuator control valve (IMRC) is used in the system, the PCM monitors the actual position of the swash plates. If the control module does not see a significant change in manifold air pressure or temperature from the sensor (MAP). And understands that the desired flap position change is not occurring, then code P2007 will be stored.

When error P2007 occurs, the swirl valves themselves are of the greatest concern. The reason is that they are inside the intake manifold. If they fail, parts can fall off and get inside the engine. For example, fallen screws entering the cylinders cause very serious damage.

The main signal that an error P2007 has occurred is the Malfunction Indicator Lamp (MIL) is also known as the CheckEngine Light.

Fault P2007 is considered serious, as there is a possibility that a damaged inlet manifold geometry damper or its parts may enter the engine. This can lead to serious damage and even complete engine failure.

The error code P2007 can mean that one or more of the following problems have occurred:

Some suggested steps for troubleshooting and fix the error code P2007:

Perform a thorough visual inspection of all wiring and lines. Look for damaged, burned, disconnected or corroded wiring or connectors. Make repairs if necessary.

Inspect all vacuum lines for cracks, splits, hardening, or perforation. Make sure that all connections are tight and that all vacuum check valves allow air flow only in the direction shown. Make repairs as needed.

If code P2007 remains, but there is no visible wiring damage, test with a voltmeter for resistance, ground and reference voltage. Compare all readings obtained with the values given in the manual. To ensure that all electrical values are within the ranges specified by the manufacturer.

Check the position switch and replace it if necessary. Observe the vacuum actuator to see if the vacuum is holding. If the vacuum is dropping, albeit slowly, then the actuator is defective and must be replaced.

Remove any codes after replacing it, test drive it to see if the code comes back.

By following these steps, you have almost certainly solved the P2007 code. But if the error persists, a faulty PCM may be causing the problem. However, PCM failure is an extremely rare phenomenon, the most likely cause of which is an intermittent electrical malfunction.

Fault code P2007 can occur on different vehicles but there are statistics on which brands this occurs most often. Here is a list of some of them: