Fault code P2066 is called “Fuel Level Sensor “B” Circuit Range/Performance” but in different programs it may be called differently. This fault designation applies to all vehicles equipped with OBD-II. 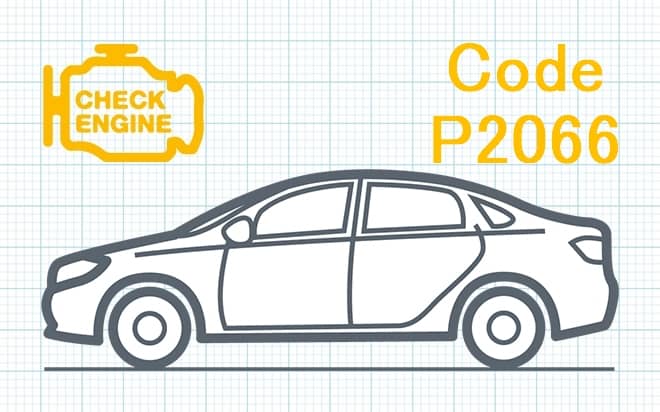 The PCM does not initially know how much fuel is in the fuel tank. The only information the controller has about the fuel level is based on the signal voltage generated by the transmitting device.

Whether the tank is full or empty, the controller expects to see a predetermined signal voltage that corresponds to that condition. If, for example, a short circuit produces a resistance incompatible with either of these states, the controller will set code P2066 and turn on the signal lamp.

This error is an electrical fault, in other words, if the input circuit of the transmitting unit is fully functional, the code will not normally be set. If there is a mechanical problem preventing the float lever from moving. The fuel level gauge reading will simply not reflect changes in the actual fuel level in the tank.

If the fuel level signal to the fuel pump module does not match the operating range for a period of time. The module that controls the fuel level circuit will record this fault code.

The main signal that an error P2066 has occurred is the Malfunction Indicator Lamp (MIL) is also known as the CheckEngine Light.

The severity of fault code P2066 is low. The vehicle will be able to continue driving, but the driver will most likely not be able to accurately determine how much fuel is in the tank.

The error code P2066 can mean that one or more of the following problems have occurred:

Some suggested steps for troubleshooting and fix the error code P2066:

The fuel level sensor normally operates without failure during the life of the fuel pump. Therefore, if you still have code P2066, do a visual inspection of the fuel tank and wiring harness.

Look for damage to the tank indicating an impact that may have damaged the fuel pump or gauge. Inspect for the presence of ground arcs where the fuel tank is grounded to the frame and for excessive rust.

Perform a voltage drop test between the positive battery terminal and the ground on the vehicle frame. When testing for voltage drop, it should be about 0.1 volts.

Higher values indicate a fault in the input circuit. Repair or replace the wiring if necessary.

After checking the wiring, you should also check the fuel level sensor itself. These sensors are quite reliable, but sometimes it is because of a failed sensor that the error P2066 appears.

Fault code P2066 can occur on different vehicles but there are statistics on which brands this occurs most often. Here is a list of some of them: