Fault code P2298 is called “O2 Sensor Out of Range During Deceleration (Bank 2, Sensor 1)” but in different programs it may be called differently. This fault designation applies to all vehicles equipped with OBD-II.

This Diagnostic Trouble Code (DTC) is a generic code. Error P2298 is considered a generic code because it applies to all makes and models of vehicles. Although the specific repair steps may vary slightly depending on the model. 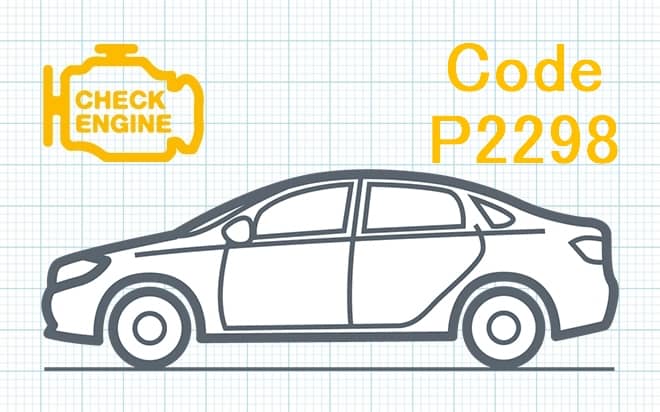 When OBD-II code P2298 is saved, the transmission control module (PCM) detects an exhaust sample error from Oxygen Sensor 1 O₂ during deceleration. Bank 2 detects an engine group that does not contain cylinder 1.

The oxygen sensors are designed with a zirconium dioxide sensing element. Which is protected by a specially designed vented steel housing. An electrical signal is sent to the PCM according to the percentage of oxygen particles in the engine exhaust gases. It is compared with the oxygen content of the ambient air.

These voltage changes are identified by the PCM as changes in the oxygen concentration in the exhaust gas. Which indicates that the engine is running on a lean or rich mixture.

If the oxygen sensor O₂ generates an exhaust sampling error during deceleration, over a set period of time, and under predetermined circumstances. The error code P2298 will be stored, and the indicator lamp on the instrument panel may illuminate.

Usually the error appears when a sudden high speed drop, but at first it is only recorded in the control module memory. After frequent repetitions, it is displayed on the onboard computer.

The main signal that an error P2298 has occurred is the Malfunction Indicator Lamp (MIL) is also known as the CheckEngine Light.

Error P2298 is not considered serious, the car will be able to start and continue driving. However, ignoring it for a long time may lead to catalytic converter failure and other consequences.

The error code P2298 can mean that one or more of the following problems have occurred:

Some suggested steps for troubleshooting and fix the error code P2298:

Make sure that all other codes are diagnosed and repaired before dealing with the error. Prepare some tools such as a diagnostic scanner, digital voltmeter. As well as a source of information about the vehicle.

Visually inspect the system’s wiring harnesses and connectors. Pay particular attention to the harnesses near the hot exhaust pipes and manifolds. Also, those routed near sharp edges of parts.

Then connect the scan tool to the vehicle’s diagnostic port and read any stored trouble codes. This information can be useful if the error turns out to be floating, so write it down for later. Now clear the codes and see if code P2298 is cleared.

Now start the engine, let it reach normal operating temperature and let it idle. If the engine is running efficiently, the O₂ sensor data should fluctuate regularly between 1 and 9 millivolts. If the voltage fluctuation is slower than expected, P2298 will be stored.

Connect the test leads of the voltmeter to the sensor ground and signal leads to monitor the data from the O₂ sensor in real time. Check the resistance as well as the voltage and ground signals.

To prevent damage to the control module, disconnect the corresponding controllers before testing the system circuit resistance with a voltmeter.

Fault code P2298 can occur on different vehicles but there are statistics on which brands this occurs most often. Here is a list of some of them: