Fault code P2464 is called “Diesel Particulate Filter (DPF) Differential Pressure Too Low (Bank 2)” but in different programs it may be called differently. This fault designation applies to all vehicles equipped with OBD-II.

Fault code P2464 is a generic code defined as “too low pressure drop of particulate filter (Bank 2)”. It is set on vehicles with a diesel engine. 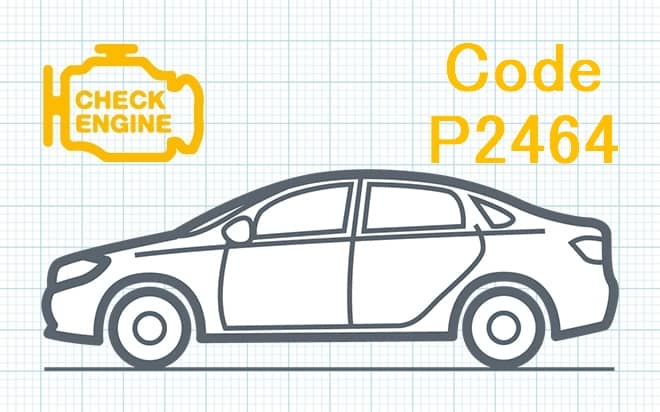 The diesel particulate filter (DPF) is designed to remove ninety percent of the carbon particles (soot) from the exhaust gases of diesel engines. It is located before the catalytic converter or NOx trap.

When engine exhaust passes through the particulate filter, large particles are trapped between the fibers. As soot accumulates, the pressure of the exhaust increases.

After a sufficient amount of soot has accumulated and the exhaust gas pressure has reached the programmed degree. The filter element must be regenerated to allow the exhaust gases to continue to pass through the DPF.

The main signal that an error P2464 has occurred is the Malfunction Indicator Lamp (MIL) is also known as the CheckEngine Light.

Error P2464 is not considered very serious, however if the problem is not solved for a long time, the engine control module (ECM) can put the vehicle into the emergency mode. This will cause the vehicle speed to be limited and engine power to drop.

The error code P2464 can mean that one or more of the following problems have occurred:

Some suggested steps for troubleshooting and fix the error code P2464:

It is better to start troubleshooting error P2464 with visual inspection of relevant harnesses and connectors. You should pay special attention to the wiring near the hot exhaust components and sharp edges.

The DPF pressure sensor should then be checked with a multimeter. If the sensor does not meet the manufacturer’s resistance requirements, it should be replaced.

If the sensor is OK, check the hoses for blockages or breaks and clean or replace if necessary. Use high temperature silicone hoses for replacement.

The hoses to the DPF pressure sensor may be melted or cracked from the temperature. Therefore, it may be necessary to reroute them to exclude the high temperature elements when replacing them.

After testing the sensor and inspecting the hoses, check the electrical circuitry of the system. Disconnect all associated control modules before checking the resistance with a multimeter. If necessary, repair or replace damaged or shorted circuits.

By following all recommendations, error P2464 will most likely be corrected and will disappear. If it does not, the problem may be a faulty engine control module (ECM).

Fault code P2464 can occur on different vehicles but there are statistics on which brands this occurs most often. Here is a list of some of them: