Fault code P0681 is called “Cylinder 11 Glow Plug Circuit Malfunction” but in different programs it may be called differently. This fault designation applies to all vehicles equipped with OBD-II. 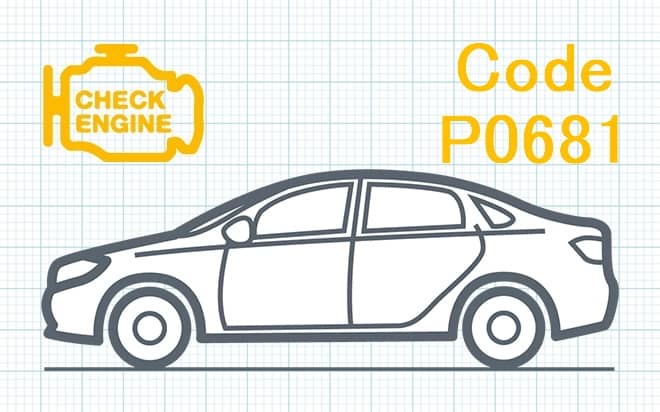 Starting too long will cause the glow plugs to melt because they produce heat due to high resistance and glow red hot when activated. This intense heat is quickly transferred to the cylinder head. Which allows the combustion heat to persist for the fraction of a second it takes to ignite the incoming fuel to start.

Code P0681 tells you that something in the glow plug circuit is malfunctioning, causing the glow plug in cylinder #11 not to heat up. The entire circuit must be checked to find the fault.

The main signal that an error P0681 has occurred is the Malfunction Indicator Lamp (MIL) is also known as the CheckEngine Light.

If only one glow plug fails, symptoms will be minimal because the engine usually starts with one faulty glow plug. But in cold conditions, you are more likely to experience the listed problems associated with fault P0681.

The error code P0681 can mean that one or more of the following problems have occurred:

Some suggested steps for troubleshooting and fix the error code P0681:

Check the wire going to glow plug #11 by placing the red wire on the tire wire and the black wire on the side of the glow plug. The resistance should be the same, 0.5 to 2.0 ohms. Accordingly, if it is higher, replace the wire to the glow plug from the tire.

Check the wires for loose, cracked or missing insulation. Connect the code scanner to the OBD port under the dashboard and turn the key to the “on” position with the engine off. Clear the codes. Do a test drive to make sure that the problem with error P0681 is gone.

Fault code P0681 can occur on different vehicles but there are statistics on which brands this occurs most often. Here is a list of some of them: